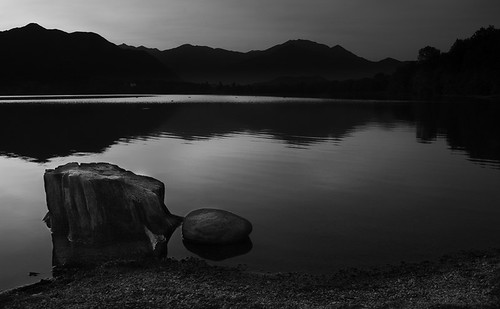 What lands a person in a psychiatric ward is a trip beyond the pale, a dip in the waters of extremity that run so deep, it terrifies the people around us as we flirt with the bottom. I didn’t reach a tipping point the day I hurt myself. I wasn’t hearing The Critic or The Stalker any more loudly or frequently that day than the one before.

No, the day I hurt myself was simply the day I couldn’t wait any longer to be heard. I tried to check in two weeks earlier, but the gruesome fact of mental health today is that there is no room at the inn for the safe. You must be pursued to the gates by the hounds of depression, or delivered in a heap just one step shy of the morgue, before a bed will materialize. The first time I went to the ER, I wasn’t willing to say the feelings were anymore threatening that day than any other. I knew which buttons I would need to push to get what I needed from this torturous, Russian-roulette game of a Skinner box, and that day, I wouldn’t play.

It shook loose a few resources I needed, though, to crumple and collapse so mortifyingly before others. A week’s wait to see a new psychiatrist is a breeze compared to the four months it would take without the stamp of desperation I let them put on me. But the new meds are mighty slow to upload. Three to four more weeks before even a glimmer of future usefulness might be perceived, the doctor says. You think, I can do that—it’s at least a destination, not just the yawning abyss of uncertain improvement.

But sometimes, some days, waiting it out with gritted teeth just doesn’t work. The sympathy garnered for a hospital visit that doesn’t become a stay is thin as skim milk. The pressure mounts up again almost immediately, sure as gravity. That scream for help is so fresh in your mouth, you can still feel the jagged, blocky shape of it. But for everyone else, it’s already passed into distant memory, evaporated by the breezes generated by our fast, forward movement. You want things to be normal, so you act like they’re normal, but they’re not normal. And you still need the help.

Anyone whose body isn’t so broken and weak. Anyone whose mind doesn’t spin uselessly on endless loops. Anyone whose senses don’t spark against every stimulus, lighting fires of irritation that burn through patience and kindness, that driest and most precious kindling. Literally anyone else. But you stand in the way, The Stalker reminds you. No one else can pick up these duties until you let them go. No one else will step in and do what you can’t until you’re gone. It’s the most sensible thing in your irrational world: Just get gone.

At that point, it hardly matters whether you’re successful. If you are, you’re gone, and that’s it. No eternal reward, maybe not even a sense of rest and a second chance, but at the very least, a cessation of struggle.

And if you’re not, well, that attempt makes your earlier cry articulate, etched in your undesirable flesh. Nobody would do this if they didn’t need help, so help they must get. There’s a line between the normal world and the extreme, and by carving a part of it into your body, you have crossed it. People tend to take notice of those gestures; if you’re lucky, they take notice while there’s still time to help. It’s almost funny to see the rush of activity, the urgency of concern, when you’ve been crying out for so long. Why was this the thing that got their attention? Is it really that arbitrary? Is it just a matter of sacrificing pain and safety to unlock these bystanders and their will to act?

Why would anyone wait, if that’s the case?

These are the things that make people consider self-harm in the first place. And if it does anything well, the psych ward confirms that there is no advantage to be gained by waiting patiently, asking politely, respecting boundaries. In this place, all that gets you is overlooked and underserved. I have to be willing to sacrifice my general unwillingness to be a self-centered pain in the ass in exchange for better care. Some days, that’s not a trade I start out willing to make.

The heart of what I need to learn is how to ask early and often, not for anyone else—I could raise a million dollars, turn out a million voters, teach a million lessons, just so long as it’s for someone else. I’m long on giving, because it’s how I define my self-worth; I’m very, very short on taking, because I’ve internalized the idea that the more space I take up on this planet, the less there is for people who deserve it more. Even just writing this blog post, with the distinct possibility it’s only worthwhile as my own way of processing things, feels like I’m wasting people’s time.

The psych ward gives its residents an odd assortment of gifts when they check in. You give up your shoelaces, your vices, your freedom, your control. What you get back is deceptively cheap. You get an excuse from anything that might demand your attention. You get a medical team all in one place. You get to rest as much as you have to—just think of the last time you could really say that. And you get to be entirely honest about how much you need help.

These things aren’t really cheap, though. To get them, you need to do something most people can’t—you need to stay in the place that scares you. The place on the banks of that deep water that would swallow you up as soon as give you your reflection. Staying that close for that long makes people in the normal world anxious; they want to help, but the water is terrifying, and changing the subject seems like the best defense. In the hospital, though, you’re not the only on the water’s edge—you’ve got company, right there in person. And because we’ve all crossed that line somehow, it’s not hard to invite each other to pull up a chair.