Reverb Broads 2011, December 16: What are your biggest pet peeves? (courtesy of Emily at http://warmedtheworld.blogspot.com)

I can only come up with three pet peeves right now, and they’re all so trivial, I’m pretty embarrassed to put them out there. Feel free to mock them. But once you know about them, beware: they might start to annoy you, too!

My first pet peeve is repetitive noises. It’s a Big Red Button that is constantly pushed by my sons, because if there’s one thing kids love, it’s making the same noises or saying the same things over and over and over and over. Both of them engage in what I like to call “echolocation barking,” when they say “Mom!” or “Dad!” over and over until someone responds to them, even if they don’t really have anything else to say. They also seem incapable of singing more than one riff of a song, though they’re happy to sing that riff on endless loop. I refuse to buy The Toys That Make The Noise. And don’t get me started on video game music…

And it’s caused by a big snarly bundle of factors. I have perfect relative pitch, extremely sensitive hearing, and a tendency toward hypervigilance — in short, I really can’t stop listening. This contributes to my general insomnia; I can’t sleep without some sort of patternless white noise, like a fan. My husband once bought me one of those soundscape machines, but I had to return it after two nights, because all of the environmental sounds had a loop, and I would lie there waiting for the same pattern of notes to come back again. Pure torture.

My second pet peeve is simple: apostrophes. Sure, there are lots of other nitpicky little grammar things that make me nuts, but I could learn to live with all sorts of things if folks would just get their apostrophes under control. They’re not even hard, people! Here, I’ll let Bob the Flower handle this one:

And my last one isn’t even that bad, but it makes the holiday season maddening for me. In the song “Deck the Hall,” there is only ONE HALL, but MANY BOUGHS. “Deck the Halls” is not the correct original lyric, though it is ubiquitous these days. I got this pet peeve from a good friend with whom I sang in church and school choir for years, and now, like her, I go around at carol sings yelling, “ONE HALL, MANY BOUGHS!” and generally annoying everyone.

You don’t believe me, do you? Well, here, look! 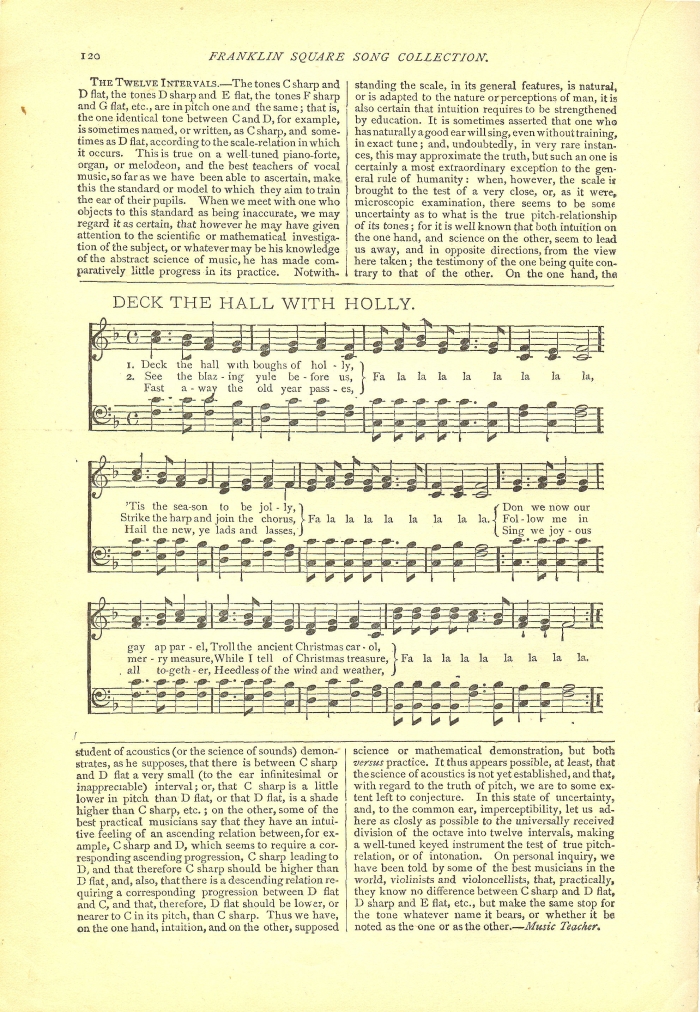 This is original sheet music, from the Victorian era when the carol became popular