REVERB GAMERS 2012, #6: Describe your all-time favorite character to play. What was it about him/her/it that you enjoyed so much? (Courtesy of Atlas Games)

I am terrible at picking favorites. That may make me a better mom, but it makes me a terrible blogger, and at the moment, it makes me an especially behind-in-posts blogger. I’ve been positively paralyzed with indecision for days now over this question, and there’s no way I’m ever going to be able to settle on a single favorite, so I’ll just write about two characters I enjoyed immensely.

The USO dance from "Memphis Belle."

Little known fact about me: if I could go back in time for one night to any period of history, I would go back to 1942 for a USO dance. (No, not the Middle Ages; I know so much about them that I’m quite sure I would be miserable back then.) I love the ’30s and ’40s–the fashion, the movies, the music, the architecture, and the general sensibility. Sure, I’d ditch the sexism and racism, and I know from direct testimony that the Great Depression sucked immeasurable ass; I’m not wishing things could be exactly like that again now, like some weirdly myopic nostalgic folks do. But I’d give a lot to check my hairpins and Max Factor red lipstick, straighten my stocking seams, and go swing dancing in an airplane hangar for one night (preferably with Capt. Jack Harkness, but I’m not picky).

As I’ve mentioned before, I also really love theatrical, over-the-top, seat-of-the-pants adventure roleplaying, and when pulp action games are at their best, that’s exactly what you get. So when the Darling Husband announced his plans to run some pulpy goodness using his own house system, I was all in.

My character was mild-mannered housewife Rosemary Rogers. But at night (you knew it was coming), she became a masked vigilante, determined to rid the streets of crime. She was… 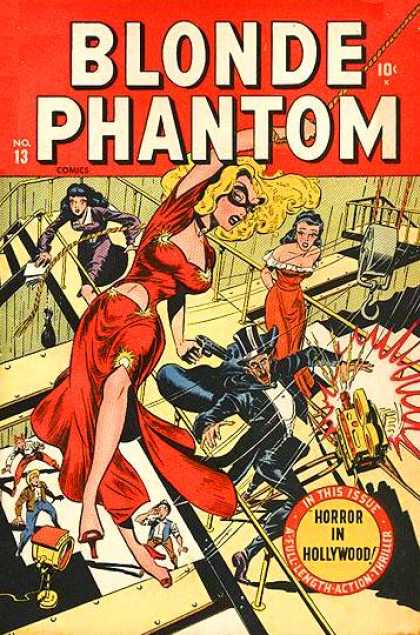 No, this isn't The Cleaner, but it's in the ballpark.

Yes, with her matched shotguns Spic & Span, she patrolled the streets on her trusty Rinse Cycle, red raincoat snapping smartly behind her as she scoured New York City!

And she did kick unholy amounts of ass.

I don’t remember a lot of specific events, to be perfectly honest. She did fly a plane (or was it a pterodactyl?) through the window of a museum to escape some thugs, long before Ben Stiller did. And we had many fine confrontations with Mexican badguy El Suerte (later revealed to be criminal mastermind El Muerte) and his stubbly henchmen, led by the mountainous luchador El Toro.

If this all sounds terribly cheesy, you’re absolutely correct. That was the point. The puns, the one-liners, the ridiculous stunts–the only thing we didn’t have were giant primary-color speech balloons reading “POW!” and “BAM!” There was no deep angst, there were no wrenching decisions, there wasn’t even any meaningful character development. I’m not saying that those things don’t happen in good pulp/noir fiction or games; I’m just saying that we weren’t in the game for that. Personally, I was in it for the moments when I described the most outrageous, over-the-top stunt I could think of, earning a squint from Cam and, in a highly dubious tone of voice, these words: “Roll it.”

And somehow, far more often than probability math supports, I did.

I played in other fantastically fun pulp games over the years, most notably a one-shot of Silver Age Sentinels on one of our trips to California, in which I played a Judy Holliday-style ditzy blonde bombshell, exposed to an atomic test while visiting the troops in the Pacific, leaving her with flight and light powers. I called her The Hollywood Starlet, and I chewed gum and talked like Marisa Tomei does in “My Cousin Vinny.” While I did a number of heroic things in the game, I best remember tormenting Fred Hicks’ inscrutable Atlantean character Deep Blue by asking repeatedly, in that squeaky Brooklyn accent, “Deep blue what?!”

None of these characters are worth more than a few panels in a yellowed comic book, but for sheer untroubled fun, it doesn’t get much better.