Here is an important but little-known fact about me:

I am the Groundhog Whisperer.

No, really–I am. They come out for me, even here in groundhog-deficient Minnesota. They make themselves known. They sit up on fence posts so I can see them as I drive by. They allow me to witness their majestic gallumphing across verdant swaths of meadow and lawn. They are my totem animal, my heartbeast.

But they’re pests, you protest! They feast on my bulbs all winter, depriving me of the spring bounty I broke my back and dented my knees for in the crisp November soil! They’re just overgrown rats!

Au contraire, mes amis. Clearly, you have not considered the nobility of this wee little beastie.

He is full of dignity, though his chubby little body and stumpy legs do not speak of elegance and wit to the casual observer. He is fierce and brave in his defense of the familial burrow. 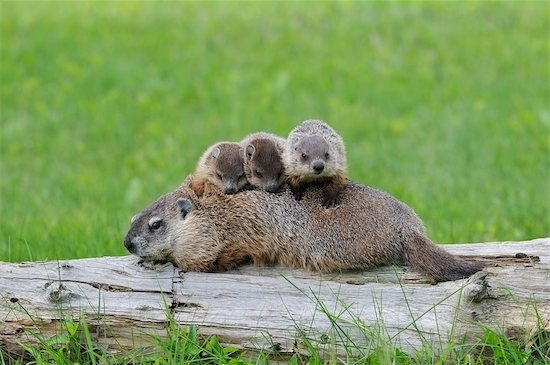 He is tender and nurturing toward his young.

And he accurately forecasts weather, which is no mean feat.

Though I lived in Pennsylvania for ten years, I never went to the circus at Punxatawny. If it were just Phil, I’d have been there in a heartbeat.

But Groundhog Day in Punxatawny is all this: and none of this:

But when I was in Pennsylvania, truly, every day was Groundhog Day, and not in the recursive morally didactic time loop sense (although there were days when that seemed the only logical explanation). Every time I needed to see my funny, furry friends, they were there for me. I saw a groundhog on my way to the hospital before the births of both my sons. I even saw them out of season, when any sane creature should’ve been fast asleep, which cheered me in the cold winter of depression that followed my fibromyalgia diagnosis.

And when I left Pennsylvania, they were angered.

Our friends, the Valentines, had a very nice Volkswagon Passat. It really hadn’t given them a lick of trouble, but shortly after we moved to Wisconsin, the car wouldn’t start. They took it in to the shop, where they discovered a frayed wire at the root of the problem. Wire replaced, they took the car home. A few days later, it happened again. Another frayed wire.

Curious if there were perhaps some mechanical problem involved–perhaps a belt or flywheel rubbing up against the wire–Clark cracked open the box around the engine. Nestled inside was a small family of groundhogs.

Clearly, this was a protest. The groundhogs’ displeasure was communicated to me. Sacrifices were made, appeasements were offered, and the Great Groundhog Spirit communed with mine. And they visited their displeasure on the Valentine-mobile no more. 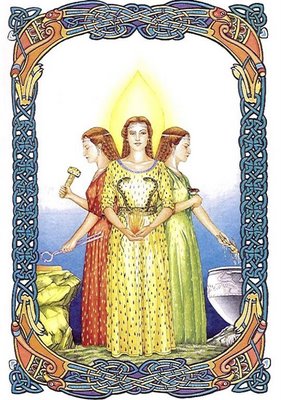 The goddess Brigid, in her three aspects

Next to Halloween, Groundhog Day is my favorite day of the year. It helps that it’s also adjacent to a particularly meaningful religious holiday: Imbolc, a fire feast celebrating the first point in the winter when you can appreciably notice the lengthening days. As a fire feast, it was dedicated in the British Isles to Brigid, daughter of the all-father Dagda, patroness of poets, blacksmiths, mothers, cattle, home, and hearth. When Christianity took over both the date and the goddess, it became both the Feast of St. Brigid, and Candlemas, the day on which the Catholic Church blesses all the candles to be used for liturgical purposes for the coming year. It’s a moment of brightness and optimism that buoys the spirit just before that last, long stretch to Spring.

And today was an exceptionally good Groundhog Day for me. I chaperoned a field trip for my fourth-grader’s class to hear the Minnesota Orchestra. I knew we would hear Mussorgsky’s “Pictures at an Exhibition,” which I adore–I’m rather fond of all the Russians, truth be told–but the conductor sprang a little surprise Debussy on us, which put me right over the moon (“The Submerged Cathedral,” if it matters to you). The kids were fantastically well behaved, and we were seated only about five rows from the stage, directly in front of the cellos and basses, which bathed me in glorious bass-clef sounds for over an hour. After I left the school, I went to a fancy-pants girly tea with a good friend I see too seldom, and we talked and talked and practically floated away on pots of tea.

It all felt very fitting. Just like my beloved groundhogs, I too was a dignified, cultured, well informed, free spirited creature today… all stuffed into a rather ungainly, overweight, slightly too hairy package.