Connor, Cam, and I snuck off to see John Carter this weekend. Griffin, refusing to fall in with the family-wide cinephilia, couldn’t care less about the whole theater experience; he downright hates 3D movies–they give him horrible headaches. So we unceremoniously dumped him at a friend’s house, and the three of us reveled in two hours of pulpy fantasy goodness. 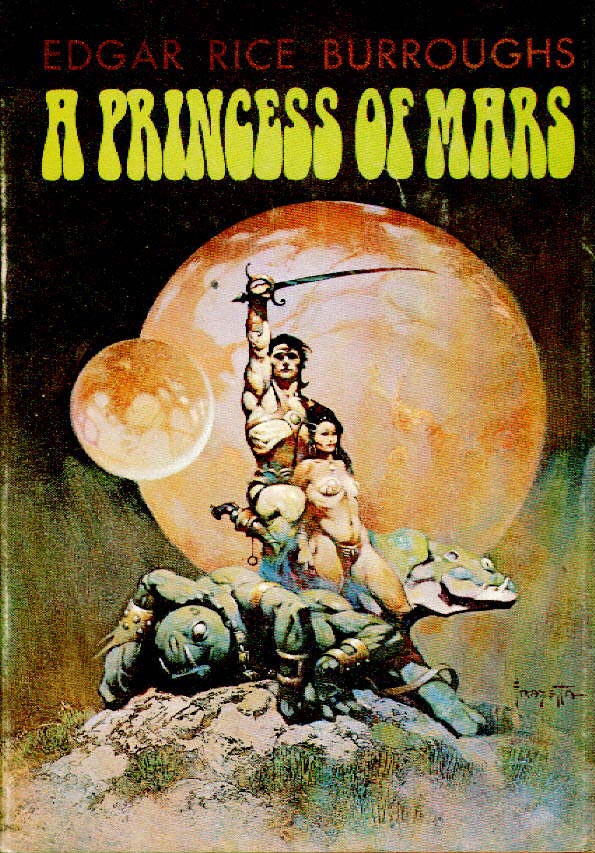 Reviewers have widely panned the movie as a “big-budget fiasco” and “the year’s first mega-disaster.” A few, like RopeOfSilicon.com’s Brad Brevet, not only took the movie at its popcorny fun face value, but also put the movie’s influences in the correct order–when the Guardian claimed that director Andrew Stanton must have pitched Disney with “Star Wars meets Avatar,” that reviewer made the same error as someone claiming that The Beatles were just rip-offs of Oasis. Brevet explains, “Throughout the history of cinema several sci-fi films have been inspired by the work of Edgar Rice Burroughs. Burroughs created the character of John Carter in 1912 and his stories have influenced a generation of filmmakers including George Lucas, James Cameron and Steven Spielberg. So if you see bits of Star Wars, Avatar and Indiana Jones inside John Carter don’t be surprised.” And, as a parent, this film adaptation passes the most important test–it had Connor scouring the shelves of our local Half Price Books so he could read the Barsoom series for himself.

This certainly isn’t the first time in recent years that a book or movie seems to have gotten the short end of the critical stick, just for being science fiction or fantasy. When George R.R. Martin’s epic fantasy series A Song of Ice and Fire was adapted as an HBO miniseries last year, NYT critic Ginia Bellafante turned her nose up at “the universe of dwarfs, armor, wenches, braids, loincloth,” and suggested that “normal” women would never choose to read or watch such a series, thus triggering righteous floods of nerdrage.

Bellafante (mostly) got away with these statements because fantasy has been increasingly marginalized in Western culture since the Enlightenment, relegated primarily to juvenile literature. No, obviously I’m not saying that only children read fantasy–duh, I read fantasy, folks. But part of why adults who read fantasy find themselves as the butt of abuse or jokes is because fantasy is something society expects us to outgrow. Think about one of the most common insulting stereotypes levied at sci-fi/fantasy fans: that they never leave home, never grow up, never get out of their parents’ basement.

[WARNING: I’m about to go all pedagogical on you here. I’ll provide links where I can, but it’s not meant to be a research paper.]

The secret about fantasy that most folks don’t know is that it was the most popular form of literature for centuries before the Enlightenment. “How could that be?” you may ask. “Wasn’t the pre-modern period dominated by the Catholic Church?” Yes, but here’s the twist–the Church was the primary purveyor of fantasy literature throughout the Middle Ages. They delivered it in the form of hagiography, or the genre of writing known as Saints’ Lives. Sure, these stories of good and righteous models of Christian values were important teaching tools for Church history and theological principals to a largely illiterate population, but if it had been all morals and no miracles, medieval listeners would’ve zoned out like the rest of us do during lectures. Instead, Church writers folded in fantasy elements that modern readers would easily recognize: superhuman strength and endurance, monstrous beasts, mysterious lands, cosmic convergences, even the walking dead. For instance, Saints Anthony of Padua and Francis Xavier, among many others, were said to have bilocated, or appeared in two places at the same time, and Saint Collette foretold the future. When Saint Edmund was beheaded by the Danes, some versions of his Saint’s Life say that the head rolled away into the underbrush of a nearby forest, and was only found when his devoted subjects followed the howls of a wolf and found the animal calmly guarding the head from other predators. In other versions, it’s Edmund’s own decapitated body that plucks the missing head from its hiding place.

Even in this Christian icon, notice that the bowl of fire is the most prominent of Saint Brigid's symbols.

Woodcut depicting St Brendan and his companions celebrating Easter Mass on the whale's back. Yes, we now know that whales don't look like that.

Irish monks in particular, with their country’s millenia-old tradition of fantastical tales of heroes and holy men, had a knack for writing the most wildly imaginative and popular Saints’ Lives. Saint Brigit’s Life carries over many elements from the stories of the pre-Christian fire goddess of the same name, such as an unextinguishable flame at her abbey in Kildare. In tales of her auspicious youth, it’s said that Brigit’s mother had left her in a cradle at home, while she went out to gather sheep. From a distance, she saw a pillar of fire pluming through the roof of the house; panicked, she ran back, only to find the column of flame originating in baby Brigit’s crib, where the child lay happy and unharmed. Saint Brendan’s Voyages (Navigatio Sancti Brendani) included aspects of all great classical voyage literature, such as the Odyssey and the Aenaid. On his way, he encounters a sea monster, various devils, and magical animals. At one point, far out at sea, he wishes aloud that he and his companions could celebrate Easter Mass on solid land. A whale surfaced near their boat, and allowed Brendan and company to hold their services on its back.

Don’t fall for the old trope about the “Dark Ages” and how ignorant and gullible medieval people were, to believe stories like these. There were active debates about the nature of the allegory playing out in these stories, even as they were recopied and retold all across Europe. Medieval listeners could read the subtext in Saints’ Lives as easily as modern fantasy reader can pick up the underlying references and messages in Tolkien and C.S. Lewis. Hagiographers (writers of Saints’ Lives) included fantastic miracles, not just for entertainment value, but also to demonstrate an important Christian belief–that, through God, anything is possible.

As science developed and evidence-based explanations replaced the old myths and stories by which we interpreted how the world around us worked, miracles and magic gradually retreated from the realm of plausibility (though, to be completely fair, for the vast majority of the population, science was just as impenetrable a mystery as magic). Keith Thomas’ Religion and the Decline of Magic is a detailed, dense, and deeply researched guide to that transition; I can’t recommend it highly enough. Those who accepted tales of the unnatural in defiance of apparent laws of the universe were thought of as gullible, and it was assumed that only people who had no experience of the world–the uneducated lower classes and children–could appreciate or believe fantasy stories.

The need for escapism, though, never went away, and many of the greatest works of modern fantasy were written in (or in response to) periods of social tension, war, and economic hardship. We don’t believe in Edgar Rice Burroughs’ Barsoom any more than Tolkien believed in orcs, or medieval readers believed in Brendan’s sea monster. But a good story can make a bad situation better, even if only for the hours you spend in a darkened theater or sunk in a book. It’s no surprise that, following 9/11 and the economic crash, we’re suddenly awash in brilliant, compelling fantasy that both pays homage to and breaks down motifs that spring directly from pre-Christian mythology and medieval hagiography. And if it’s good for nothing more than a popcorn-munching, visually appealing (helloooo, Taylor Kitsch and Lynn Collins) brain break…well, we’re just following in our ancestors’ fantastic footsteps.