I took part in an offshoot of the Reverb blogging projects, called Reverb Broads, last December. I really enjoyed the almost-spiritual discipline of writing something every day, and the community of other women I hooked into has lead to some incredibly fulfilling new friendships and a whole bunch of excellent reading. So I’m doing the summer iteration throughout June. If you’re enjoying the prompts and the posts they inspire, consider joining in the fun!

Summer Broads 2012, Prompt 1: With what fictional character (book, movie, TV, etc.) do you most identify? Why? (by Kristen of Kristendom)

This one has two parts, and neither of them include Anne Shirley (Anne of Green Gables) like everyone else’s responses apparently do. 🙂

First, there are the characters I’d like to be like. They tend to be wildly intelligent, super useful, ultra competent women who stay calm in the most unimaginable situations. There’s Claire Fraser from Diana Gabaldon‘s Outlander novels. She starts out as a war nurse in World War II, then goes back in time to 1848 Scottish Rebellion (Bonnie Prince Charlie and all that). Once they think she’s not a whore who went out into the woods in her slip, she quickly ingratiates herself to the rebels with her useful medical skills. She picks up a hot redhead for her troubles (that much, at least I can live out), and generally rolls through major events of history with grace and aplomb.

Then there’s Mary Russell from Laurie R. King‘s series of the same name. Mary’s a precocious, bookish teenager when she meets Sherlock Holmes, and first becomes his apprentice in the art of detecting, and later, his wife. She’s easily as intelligent as he is, and though their life is anything but restful, their relationship could be described that way. She’s brilliant, a fast learner, and wicked cool in a crisis.

And, while I do have some reputation for functioning well in the face of disaster (hence the nickname Emergency Lass), I don’t have any illusions that I’m as cool as they are. Nor am I as consistently one personality as most characters. That’s not surprisingly–characters need to conform to predictable archetypes, and only evolve a modicum of complexity after a series is well under way. So, while this question left me at a sincere loss for days, the closest formula I can come up with is what follows. 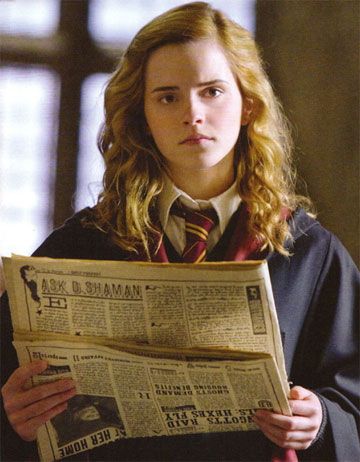 A big part of me is Hermione Granger. I’m a bossy know-it-all witch, always eager to share what I’ve learned with other people. That’s why I’m happiest when I’m teaching–all that reading and study is zero fun if I’m not sharing it with someone else. I’d rather spend my vacation in the restricted section of the library, and I’m a bit befuddled by how little attention most people seem to be paying to, well, everything. I’m pretty sure there’s no problem in the world that can’t be solved with more reading. I’m also fiercely loyal to those I love, and willing to go to the mat (or the troll, or the Shrieking Shack, or the Ministry of Magic) for them.

But Hermione doesn’t cover my weird, unpredictable, impulsive side. For that, I turn to Delirium. She’s one of the Endless, a group of mythic archetypes that function as quasi-divinities/forces of nature in the classic graphic novel series The Sandman. Delirium hasn’t been quite right in the head since her brother Destruction, the big bluff protector of the bunch, split town. She wanders between her own reality and everyone else’s, and is fond of bizarre pronouncements and non sequiturs. At heart, though, she’s a little confused, a lot optimistic, and genuinely loves her family, imperfect though they are.

And her hair changes color with her moods, a power I sincerely covet. If only so I don’t have to touch up my roots.